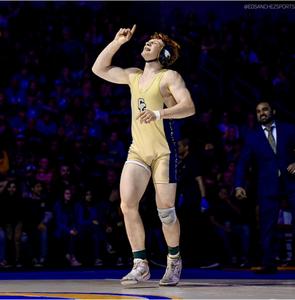 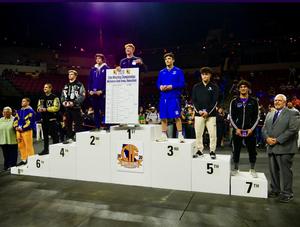 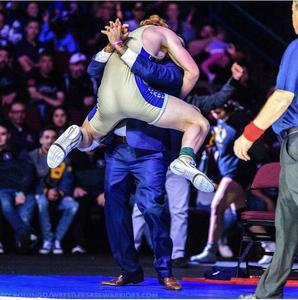 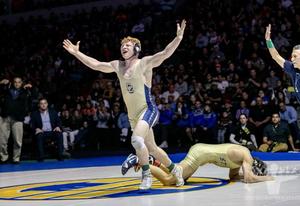 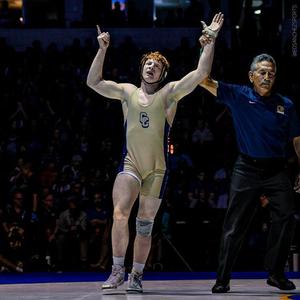 Andrew is a Calvary Chapel High School success story! Andrew is the 2020 CIF State Wrestling Champion for the 160 pound weight class.
There are over 27,000 male wrestlers in the state of California and only one champion at each of the 14 weight classes. Andrew's accomplishment is phenomenal to say the least. What makes Andrew's rise to the top more amazing is his success is a direct result of an insane work ethic and desire to be the best. Andrew has been quoted as saying he wanted to be a champion as badly as he wanted to breathe. Most CIF Champions in the sport of wrestling are what we call "age groupers", they start at a young age and are part of clubs and teams. Andrew did not start wrestling until just before his freshman year. It is through Andrew's hard work and determination that he qualified for the state tournament his junior year. However, it was Andrew's senior year that he hit his stride after 3 full years of working on his technique with Coaches Dane Valdez and Mike Gayer. Under their mentorship, Andrew began his meteoric rise to the top.
Andrew first gained the attention of the wrestling community at the Mann Classic where he defeated a nationally ranked opponent and placed 2nd. Next up were back-to-back victories placing 1st at the La Costa Canyon Classic and Ed Springs Invitational. Again, at those two tournaments Andrew showcased his dominance by defeating many top level wresters. Next up was the nationally vaunted Doc B, where only the best of the best are allowed to compete from all over the country. Andrew rose to the occasion to defeat more nationally ranked wrestlers. His only loss was to a wrestler who was ranked 1st in California and 2nd nationally. Andrew's 3rd place finish at the Doc B earned him the notice of many NCAA coaches. After the Doc B, Andrew would go on to win Battle for the Belt, reaffirming his place at the top of the podium and garnering him even more attention from top wrestling universities. Andrew swept through his Orange Coast League and CIF Southern Section competition to earn his spot as a league and CIF champion. The Masters tournament once again pitted Andrew against the young man who defeated him at the Doc B, and again Andrew was bested, Andrew placed 2nd at Masters. Andrew's unsurpassed desire to be a state champion caused him to double down on his training, watching the recordings of his matches, learning his opponents' styles and how to effectively counter them, making the necessary adjustments, honing his diet, strength training, cardio, and technique. Andrew was on a mission. The CIF State meet can be overwhelming for many. Andrew handled all his competition and ended up once again facing off against the young man who defeated him at Doc B and Masters in the finals. This time was different, this time Andrew controlled the match, this time he came out on top, this time Andrew was the victor and the new CIF State Champion and now ranked 12th in the nation. Andrew was also named First Team All-League and the Orange Coast League Athlete of the Year.
Throughout the 2019-2020 season, Andrew maintained a 3.8 grade point average. He never lost his humility or his sweet innocent demeanor. Andrew is one of the nicest young men you will meet, with a wholesome heart. After winning the state championship, Andrew was in an enviable position and able to chose which top NCAA division 1 college he wanted to continue his career wrestling for as he had many scholarship offers from NCAA wrestling titans. After many hours of deliberation, Andrew chose to wrestle for the University of Minnesota - go Gophers! Calvary Chapel is losing an outstanding young man after graduation, but Minnesota is gaining The Sparknado, and there is no doubt he will continue to grace the wrestling mat with integrity, humility, focus, skill, work ethic, and determination. Andrew's future is bright and he is just getting started!