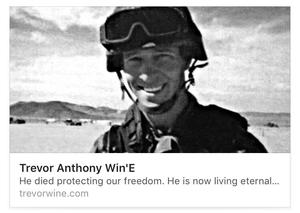 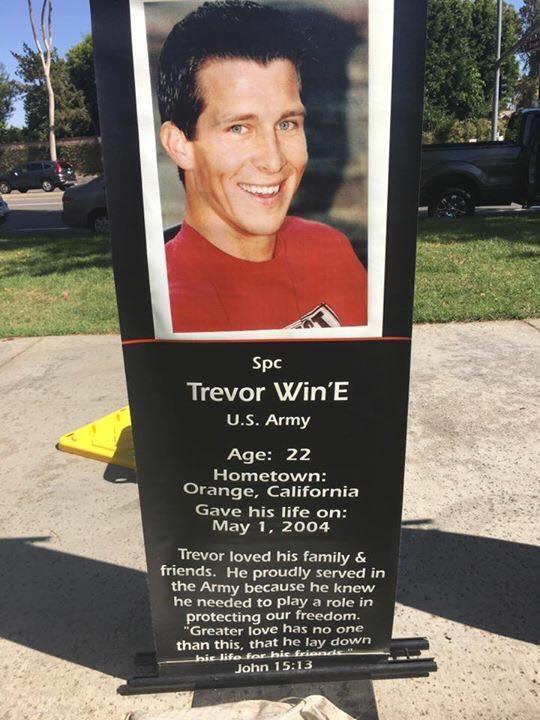 Specialist Trevor Anthony Win'E, of Orange County, California was born 24 September 1981, the youngest child of three. He was a son, brother, uncle and American soldier.

Trevor enjoyed hockey, snowboarding, SCUBA diving, and going to the mountains and river. He was known for his infectious smile and adorable dimples. He played soldier as a child, and his dream was to serve his country. He attended Maranatha Christian Academy and graduated from Calvary Chapel High School, in the spring of 2000. He attended Concordia University, and worked for Chemco, installing chemical operating systems, until he joined the Army of 1 May 2002.

After graduating from Basic Training at Fort Benning, Georgia, Trevor studied his 92F MOS, Petroleum Specialist, at Fort Lee, Virginia. He arrived at Fort Lewis, 18 October 2002, and was assigned to the Petroleum Platoon, in the 24th Quartermaster Supply Company (24th QMS). He was an essential player in Fort Lewis fueling missions, and participated in the Corps Warfighter Exercise, the 1st Brigade JRTC and NTC rotations, and the JLOTS refuel mission, at Bremerton Naval Base.

The 24th QMS deployed to Iraq, with the 44th Corps Support Batallion (44th CSB), in November 2003. The unit provided critical POL support to the 3rd Brigade, through Fuel Systems Supply Points (FSSP) and refuel operations at the Kuwait/Iraq border. SPC Win'E and his fellow soldiers were given a twelve hour notice to move out from Camp Udardie to the border, to provide fuel support to the brigade and the CSB, so they could conduct thier tactical road march into Iraq. He also worked at the FSSP, receiving thousands of gallons of fuel from the Turkish trucks delivering fuel from Turkey. Because of his professional knowledge and ability to make any mission happen, SPC Win'E was handpicked to serve as the petroleum specialist on the mission at Forward Operation Bases Diamondback, Freedom, and FUlda. For his outstanding marksmanship and soldier skills, he was also chosen to be the Gunner on the company's gun truck.

On 30 April 2004, while serving as the Gunner on the lead truck in a convoy, SPC Win'E was injured in an attack by an improvised explosive device (IED). On 1 May 2004, he died from injuries sustained from that attack. He is survived by his parents, Rick and Debi, brother and sister Todd and Tracy and their families, grandparents Donn and Ruth Ann Curran and Gerry Win'E, and numerous aunts, uncles, and cousins and his dog Betty.

Trevor loved being a soldier and was honored to serve in the military. He had strong convictions that it was his place to serve in Iraq, and he was especially affected by the Iraqi children he met there. He is loved and will be missed by all who knew him.

See the LA Times link below to leave a message or memory of Trevor.