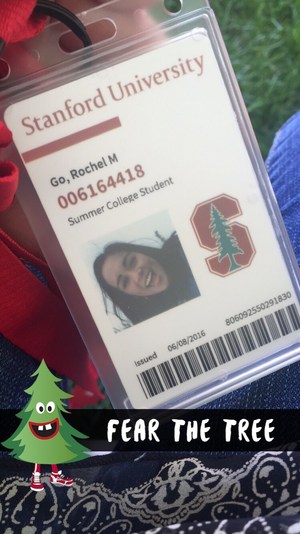 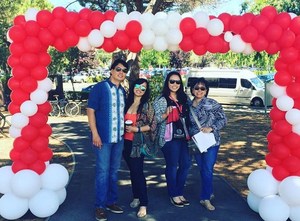 Read about her experience at Stanford University.

I was four years old when I first visited Stanford University. There are pictures of my family and me at all the landmark places on campus, and with each landmark, I can recall myself creating a dazzling montage of walking around the endless streets of Stanford just so that I would not fall asleep. What I always quickly recall was sitting in the backseat of the car with my older sister. She had just graduated from the eighth grade and this seven-hour road trip was her graduation present. She was excited and impatient to be on campus and so was I.

Four years later, my sister got accepted into Stanford, and a place that was once a summer destination was going to be her home for the next few years. I was eight years old at that time, and the excitement of her going to college overshadowed the fact that she was leaving. While I was happy and proud of her, I wondered then if I would someday get to spend time in that place.

In the past eight years, I have been to Stanford over a dozen times. Every single year for four years, we dropped my sister off in her new dorm, attended Parents’ Weekend, and picked her up at the end of the school year. Once she graduated in 2012, I thought I wouldn’t be back so often but I was wrong. One week at the start of every summer, my parents would fly me up to the Bay Area so I can spend some time with my sister and she would take me to Stanford commencement ceremonies for fun and for the inspiration.

However, this summer was different than any other summer I had in the past. I was sixteen and had just been accepted into the Stanford High School Summer College, a program that allows academically strong high school students to take Stanford college courses.This was my chance to explore and experience the campus and all it had to teach me. This time, my sister was dropping me off at Stanford and I was the student with the backpack, the books, and the rigorous studying schedule.

Instead of the prior summers of going to Stanford commencement ceremonies, hopping from each department graduation ceremonies, or getting glimpses of Condoleezza Rice, or my volleyball role model, Eric Shoji, or Brad Lawson walking past me on the sidewalk, I was going to Stanford this summer to be a student and to immerse myself with the true college experience.

Prior to the first day of class was Orientation Weekend, an opportunity for students and parents from all over the globe to get to know each other and those on staff. It was a weekend where parents would help their children settle in the dorms, help them grab their IDs and schedules. This weekend for me was a small glimpse of the summer ahead of me. I wasn’t going to have my parents for eight weeks, nor the familiar environment to ease me -- no, it was just me and my sister up north and the comfort of knowing that I had my backpack and book ready for class the next day.

The course that I chose to take for the summer was Personality Psychology. What I expected from this class was that the teachers would be hawks watching over us and my classmates would be scavengers continuously competing to be the best. However, my expectations was not how reality turned out.

Walking into the department, and taking a seat I recalled my whole family besieging me in the prior hour: my sister telling me what places are good to hang out at and telling me her stories about her college days, my mom worrying and cautioning me about safety, and my dad giving me landmarks to remember if I am on the right route from Point A to Point B. Everything was surreal at that specific moment because, I was finally here in Stanford. Ever since I was a young child, I knew that the day I would experience Stanford for myself was coming -- to understand the vibe and the culture of the place, but before, that day felt so far in the future. When one lives their life day by day, such as me, the days just catch up with the future, and those unthinkable moments in the time ahead become the present moment. What I am trying to get to, is that this unthinkable moment I knew was coming, was right now, making me nervous to know what comes next.

Walking into the department, I already felt the pang of anxiety hit me. I was two hours early, my backpack hanging on both shoulders with an overstuffed pencil pouch stuffed with a variety of pencils, pens, and flash drives, and a textbook already starting to be filled with notes on each margin.

Once some students with the red lanyard started to come in, I was surprised by myself that I initiated the conversations with them. After accidently assuming a college guy was a high school student taking the same class as I was, I started making less statements and asking more questions instead. From one conversation with one person, it led to multiple people listening in and joining in our laughter and interest towards each other.

The conversations were made up of simple questions: What’s your name? Where are you from? What’s your high school like? Reminder: these were all questions that uttered my mouth to continue a sort-of natural flow of the conversation. Each high schooler soon opened up to me  and the questions started to go both ways and evolved into deeper questions such as Why did you choose to take this class? What do you want to do in life? What are your dreams?

The most memorable part of my summer in Stanford was the twenty minutes prior to class. I was content that my expectations matched what reality gave… or so I thought.

I looked at the glass door, waiting for another student to walk into the hall to peak my curiosity once again. The next person who walked through the glass door did not peak my curiosity… no, it peaked my excitement. My jaw dropped because I was looking at Jane Campbell, the goalkeeper of Stanford’s women’s soccer team, who I have seen featured on Stanford’s instagram, billboards, and website. Something that I did not expect from this summer was seeing her, or in fact, any Stanford athlete. However, that was before class had started.

More Stanford athletes started to roll into the class from the backdoor. They were radiating with confidence and all I could do was look behind my shoulder gawking at the six athletes sitting right behind me. It was like having the ultimate basketball nerd getting a glimpse of the 1992 dream team walk out onto the basketball court for the first time, or like a makeup geek getting a glimpse of Kylie Jenner’s makeup routine. I was awestruck and in that moment, I knew that I could not focus on the class lectures without getting a picture with each of them.

Once class started, the professors walked into the room and quickly introduced themselves. In the beginning of any course, what most teachers do is give the students the opportunity to get to know one another. This is an aspect of the first day of school that I always appreciate because it gives a little glimpse of who we’re sitting next to. Most of my friends from this course were not from California -- most were not even from America. Everyone came from a different country, spoke multiple languages, and were from different age group. And once again, my jaw dropped, but instead of feeling a pang of anxiety, I felt more assured that I could get through this class with the help of my friends and the professors.

Walking out of my first college class, I was relieved to be free for the day, and walk over to the Axe & Palm with my friends to grab some food and lounge on the couches to do some class reading. The thrill that I had during class did not stop just when I had left the department building because when entering the eatery, eight more Stanford athletes walk passed me, and my jaw drops just one more time. So far from what I had experienced, I felt like this exact summer was better than any summer ever experienced.

This past summer was truly an adventure I could never forget. From the friends I made to the new places I explored, I felt like my smile became wider than ever before and the intensity of my excitement hitting a whole new level. Outside of the classroom, I got the whole Stanford college student experience down: going to University Dr to grab sushirrito and thai tea boba, watching the NBA playoffs on the computer while the Warriors and Cavaliers were just playing in the Oracle, listening to my Spotify playlist while writing an essay, hiking The Dish right before class, and having my whole family from SoCal pick me up at the end of the summer. Too cool….