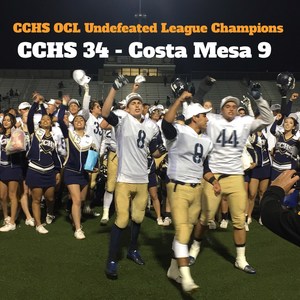 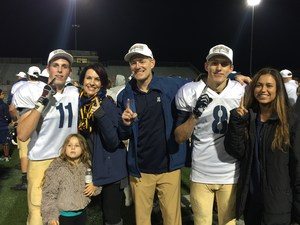 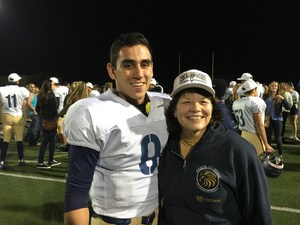 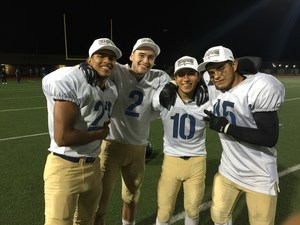 The Eagles made history by finishing their season undefeated in league! They begin their 2015 CIF playoff run on Thursday, Nov. 12th at Jim Scott Stadium at 7:00 pm against Canyon.
The Eagles had already captured the league title before entering their final season game against Costa Mesa, with a win, they would be undefeated league champions. The Eagles struck first when Patrick Glasgow found Isaiah Bustillos in the corner of the end zone. Bustillos made a spectacular one hand grab giving the Eagles a 7-0 lead. After Costa Mesa tied the score, the Eagles took a 13-7 lead when Peyton Rogers scored on a slant pass from Glasgow outrunning the Mustang defenders to the end zone. The Eagles defense stepped up and Costa Mesa punted pinning the Eagles at the one yard line, and Costa Mesa tackled the Eagles in the end zone for a safety cutting the Eagle lead to 13-9. The Eagles punted and Costa Mesa looked like they would score to take lead. Senior Luke Thompson made the play that changed the game when he intercepted the pass and ran it back 80 yards for the score giving the Eagles a 20-9 lead. Braeden Stack and Isaiah Bustillos each scored making the final score Eagles 34 - Costa Mesa 9 and the celebration was on! The Eagles begin their CIF playoff run against Canyon High School at Jim Scott Stadium on Thursday, November 12 at 7:00 pm. See you at the game, GO EAGLES!